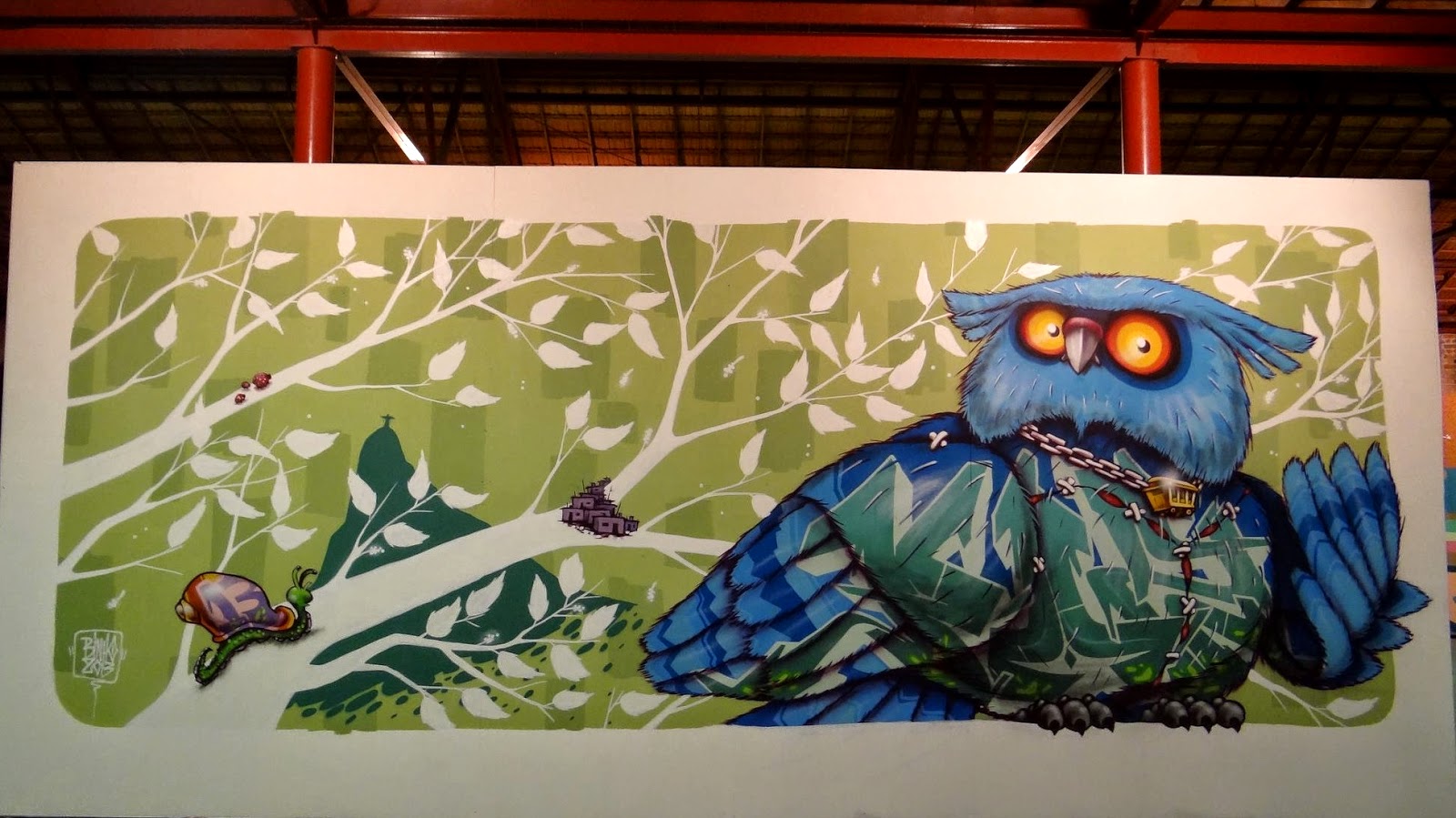 During these last weeks I had the pleasure to interview Binho Ribeiro, one of the first Brazilian graffiti pioneers based in Sao Paolo, who is famous for his colored imaginary series of characters. He usually travels a lot and he has painted in several cities all around the world, such as during his last participation at Wynwood Walls in Miami and at Meeting of styles in Latin America.
We spoke of different kind of topics within this interview, in which he also retraced his experiences as a curator of the International Biennial of Graffiti Fine Art, where the Italian artist Etnik was invited in the last edition (here is the interview to the artist by Giada Pellicari), and of the Museu Aberto de Arte Urbana (MAAU), which is an important urban art project in Sao Paolo.
If you want to see his artworks by yourselves you should go to the Amazing Day Art Exhibition, which opens on the 11th of this month at Locate di Triulzi (MI), where he will be one of the artists exhibiting.

Alessandra: You started as a graffiti-writer in the 1984, becoming one of the first important old school ones from Sao Paulo. Can you tell us about the scene of your city?
Binho: At that time there wasn`t a graffiti scene. The artists came up as few ones, the crews were taking shape and some walls started being painted by them. Today Sao Paulo counts around five thousand graffiti writers.

A: You are both a curator and a graffiti artist. Can you tell us something about your style? Where do you get inspiration from?
B: As an artist I have my classic graffiti tags, characters, scenarios, wild style and some screens from this traditional work. I also developed one conceptual line, where I made use of figurate animals with color and peculiar style. This line of the work is the proposal that I use when I`m exhibiting inside galleries and museums.
My inspiration comes from the Brazilian colors, animals that transmit life, movement and positive energy. Acting as a curator I explored my experience of thirty years in this cultural area in Brazil, Latin America and other territories around the world. The connection with artists and cultural producers gave to me the possibility in order to identify the style, the concepts and artists behave from many places around the world. Therefore I turn my trusteeship unique and authentic.

A: You are also the curator of the International Biennial GFA at the MUBE museum. How the Biennial Fine Art Graffiti has started in Sao Paulo city?
B: Trough an invitation from the Museu Brasileiro de Esculturas MUBE (Brazilian Museum of Esculpture) to develop a project that would bring the urban art inside a museum, I realized the opportunity of doing something that was different from other cases. With the success of the first exhibitions, we started the project of creating a biennial by turning the posterior exhibitions into something bigger and more embracing.
It started in 2009 and since from the first biennial, we kept running other exhibitions, all of them with outcomes characterized by great results within media and public. Then the second biennial came with great success and the number of visitors estimated in fifty five thousand people in a month. Now we are working on the third biennial that should open on the first semester of 2015.

A: Can you tell us something about the next edition of the Biennial?
B: As long as I know it`s privies it’s expected to be on the first semester of 2015 and even to me the contents are still a mystery. Here in Brazil we`re having a hard time to get some projects enabled due to the World Cup and the elections. But even if these events were planned, we entered the new year by painting on the Avenue Reboucas`s tunnel in Sao Paulo City downtown.

I travelled to Peru to attend the Latido Americano Event and I had my presence in the Porto Alegre Meeting of styles, (link) and for now I have another projects going on for the next months. During this last period I’m also focusing on the Wynwood Bloc that will happen in December.

A: You are the curator of the Museu Aberto de Arte Urbana de Sao Paulo (MAAU), an important art project about restyling of the suburb areas in the city, which has the capability to transform the subway columns into artistic productions. Would you like to talk about this project?
B: The heap of the Museu Aberto de Arte Urbana (MAAU) doesn’t stop growing: from the 15th until the 24th of February 2014, the Sao Paulo’s subway’s columns that are sit on the Carandiru station on the north side of Sao Paulo City were included to its collection. Twentyfive artists were invited to exhibit their work. A lot of spray ink gave colors to the eleven columns in the main platform at the Cruzeiro do Sul avenue.
The MAAU had its beginning in 2011, when twelve graffiti writers were prevented from painting the subway’s columns and were arrested due to environmental crime. Right on the next day, myself and Chivitz has turned the incident into an innovator project with the support of the Secretary of State of culture, the subway and the Prefecture. Six months later, the MAAU was born: A joint of graffiti panels were installed around the columns that support the elevated tracks of the Linha 1-Azul (Blue Line 1) in Santana neighborhood.
In October 2012, artists and dwellers revolted when grids were put into the area in which the graffitis were painting. After a popular petition the outcome was the grids removal. The process culminated with the building of a walkway, one bicycle path, the maintenance of the lawn and illumination. The neighborhood gained international visibility and a big spot on the media.

Now with the status of a group work and counting on the support from the Santana’s sub prefecture and Sherwin Williams, the tint of the murals quality has improved. The MAAU has it’s origin in Santana station and follows uninterruptedly embracing the stations Carandiru and Tiete, in a sum of approximately two kilometers of art and Urban culture. This project is provided by a urbanist  and features some social characteristics, by looking for the interaction between renowned and beginners artists. This last one is the promise in order to compose the new generation of talented ones. The second edition of this project was made up of eleven columns and totalized twenty two new murals, so in this way we have increased the MAAU’s collection. The artists that took part were: Binho, Dalata, Caps, Magrela, Envio, Mauro, Pequeno, Alopem, Dask, ZN Lovers, Sliks, Desp, Coletivo ZN, Feik, Cranio, Minhau, Chivitz, Inea, Biofa, Caze, Zeis and Alex Sena.

A: You just come back from Miami, where you participated to the Wynwood Festival. Tell us about this last experience?
B: Talking about my experience in Miami last December, during the period of the Art Basel and Wynwood Walls, I was invited to take part into the Brazil Art Fair, which is one exhibition from the Brazilian art galleries that usually happens at the same time of the Art Basel. The gallery Jo Slaviero & Guedes that are managing some of my work of art attended the exhibition, for which I painted one canvas screen with 2X6m.  Along this project I had already set up with some friends and partners a mural at Wynwood bloc in partnership with the Adjust Gallery,  taking part with my American crew CBS through the presence of the graffiti writer Snek.

My opinion about the Wynwood: I was very much satisfied of realizing the volume and of the Marketing potential for the street Art and Graffiti. I noticed that that’s a lot to work in this path for the growth and acknowledgement of this culture. I believe that plenty of formats of exhibitions can be experienced.

A: What about next project in this 2014?
B: Personally I’m now committed to GFA Miami version.